Despite the built-in obsolescence of fashion, its greatest inventions live on and on.

But who can take full credit for blue jeans, the T-shirt, the trenchcoat or the classic white shirt?

“I’m always suspicious of the inventor of an important vernacular garment,” said Valerie Steele, executive director at the Museum at the Fashion Institute of Technology. “Like we could say that Levi Strauss made a lot of money from blue jeans, but he didn’t really invent blue jeans.”

In fact, there aren’t any fashion designers among the inductees in the National Inventors Hall of Fame. To retrace the origins of some of fashion’s most lasting garments and accessories, WWD spoke with Steele and two other prominent historians: Caroline Stevenson, the London College of Fashion’s head of cultural and historic studies, and Elizabeth Semmelhack, the Bata Shoe Museum’s creative director and senior curator.

It is worth noting that inventing and improving are two entirely different things:

“[Yves] Saint Laurent said he wished he had invented blue jeans, of course — and put a patent on it I bet?” Steele said.

Jeans were incrementally developed over the years from “bleu de travail,” blue trousers for the working class that were ubiquitous in France and Italy from the 18th century on, Steele said. “What Levi Strauss apparently did was put in grommets to make them stronger so that the gold miners could work in them. So he improved it. That’s often the case. It’s like the brassiere. Nobody can be credited with inventing the brassiere,” Steele said.

First Ladies Fashion Through The Years

”They made important improvements in the design of denim work pants.” she said. “In that way, they have the best claim to being the ‘inventor’ if you don’t mind putting quotation marks around that.”

Black and simple black dresses have been around since the 19th century when black dye became less expensive. But the little black dress, as we think of it today, as in the short, knee-length version, took hold in World War I for a sad reason, Steele noted. “There was so much mourning dressing,” she said.

After the war, Coco Chanel became most strongly associated with the little black dress, “although she certainly was not the first or the only Paris couturier to have sensational sales in that area,’ Steele said.

In the Twenties, a minor couturier sold “a ton” of LBDs called La Garconne, a boyish look that was named after the risqué novel of that time. “It was already a popular thing and Chanel put her spin on it,” said Steele, adding that the designer once said that Paul Poiret’s brilliant and fantastic colors like lime green and burnt orange made her nauseated. Neutrals like black, beige and navy blue were more her speed.

Chanel also talked about how she did nothing but take the masculine and bring that to the female wardrobe. Black or blue suits have been central to men’s wardrobes since the 19th century, “when writers commented how the dandy was the black prince of elegance,” Steele said. “Chanel brought the idea of the little black dress as the uniform of chicness into pop culture.”

Developed before World War I, the trenchcoat got its name from trench warfare, Steele said. “The company that is most associated with it is, of course, Burberry. Although there were definitely other companies making trenchcoats and it was seen as almost a part of the British army uniform in effect.”

Yves Saint Laurent was also very famous for putting women into trenchcoats and “seeing that as a very crucial masculine element in the women’s wardrobe,” Steele said. “He definitely played a role in that as well.”

In the late 19th century, laborers cut their jumpsuits in half to keep cool in the summer, according to Caroline Stevenson. During the Mexican-American War, the U.S. Navy issued undershirts — the first manufactured T-shirts, she said.

In the Fifties, actors Marlon Brando and James Dean in their respective roles in “A Streetcar Named Desire” and “Rebel Without a Cause” revolutionized the T-shirt as a fashion statement instead of an undergarment. “Wearing them as everyday fashion was a tough, subversive statement and a nod to the working class,” Stevenson said.

FIT’s Steele noted that aside from being one of the first examples of underwear as outerwear for men, the white T-shirt emerged as working class men’s attire and then sportswear after college sports teams put writing on them. “By the Sixties, the T-shirt became a billboard for whatever your beliefs were,” she noted.

Later in the Sixties, with the rise of mass advertising and new technologies in screen printing, printed or slogan T-shirts gained popularity “as companies began to see profit in their products being advertised on living people. In the Seventies, the white T-shirt became a message board for political statements and DIY culture,” Stevenson said. 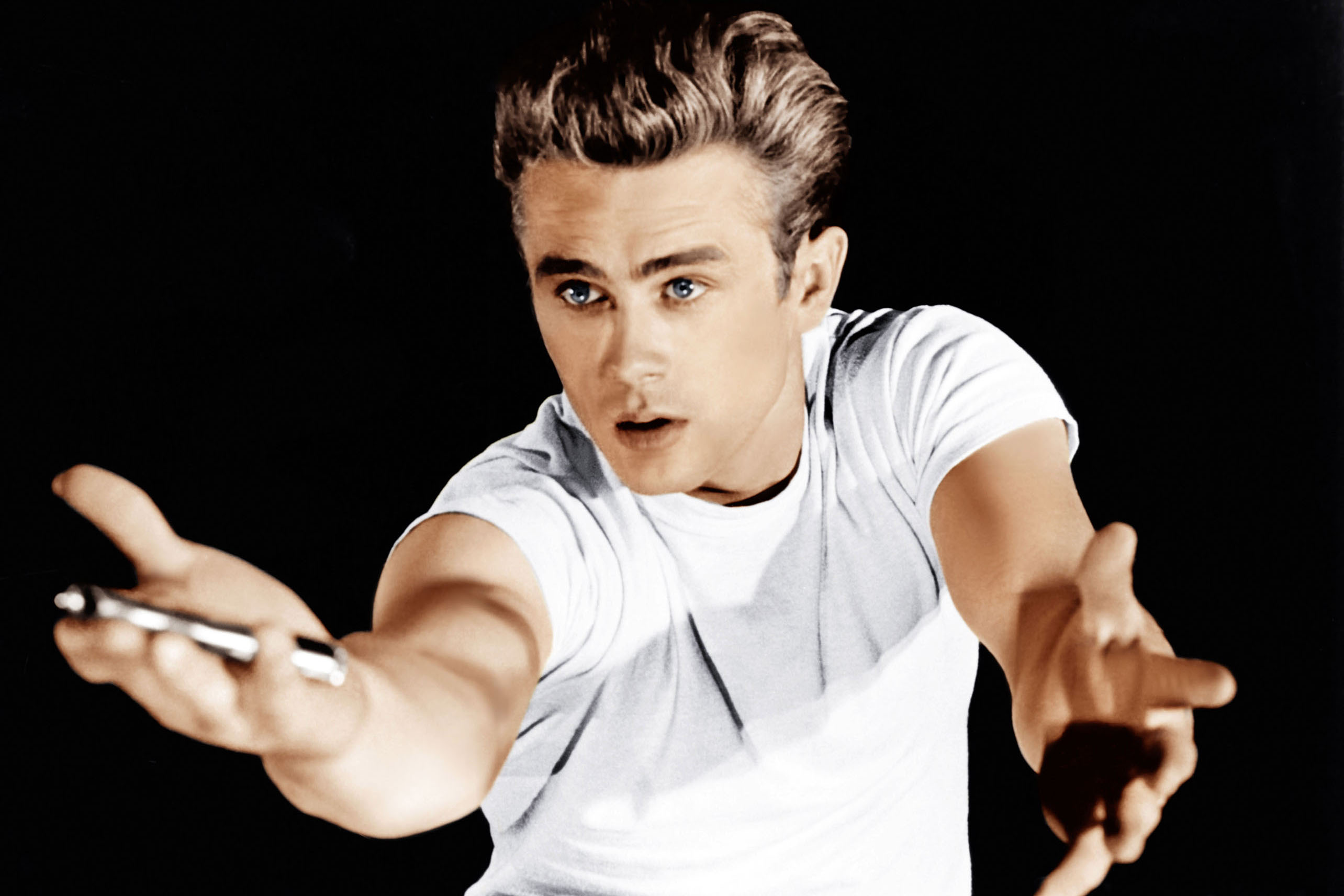 “Rebel Without a Cause”, James Dean, 1955. Everett Collection

Forty years later, Whitcomb Judson experimented with zippers as fasteners for shoes and in 1913 Gideon Sundback of the Universal Fastenings Co. designed the modern zipper, calling it “the Seperable Fastener,” Stevenson said. His creation was widely used on galoshes and tobacco pouches. B.F. Goodrich finally titled it “The Zipper,” Stevenson said.

In the Thirties, an ad campaign for children’s clothing featured zippers as an easier way for children to dress themselves. Soon thereafter, zippers replaced buttonholes in men’s trousers and Esquire men’s magazine deemed it as the new tailoring for men, Stevenson said.

Elsa Schiaparelli brought zippers into high fashion in the Thirties and Azzedine Alaïa did amazing things with them in the Eighties, Steele said. Zippers appealed to Schiaparelli for their aesthetics. “It was so in-your-face, because it was such an industrial, humble thing — not something that you would think of putting on a fancy couture dress. But that was her. She was always experimental.”

In 1941, George de Mestral invented Velcro, after becoming fascinated by the burs that kept sticking to his clothes and his dogs‘ fur following their walks in the Alps. After examining the burs under a microscope, he saw the hundreds of hooks attached themselves to anything with a loop including fibers in his clothes. His initial hook and loop creation used cotton strips. After realizing that synthetic nylon creates loops when seen under hot, infrared light, he took that route and trimmed the ends of the loops to create hooks that aligned perfectly. Velcro took 10 years to perfect and the name is a portmanteau of “velours” and “crochet” (velvet hook), Stevenson said.

Considered more utilitarian than fashionable, Velcro was used in the Sixties for Neil Armstrong’s space suit and for speed-oriented athletes, Stevenson said. Around that time Pierre Cardin, a NASA-fascinated designer and innovator with industrial materials, used Velcro in his designs. Paco Rabanne experimented with Velcro, and in 1964 Andres Courreges presented a space-inspired collection using Velcro, plastic and vinyl. Around 2013, with the onset of normcore and functional clothing, Velcro became more fashionable. Versace, Opening Ceremony and Phillip Lim helped fuel the trend with Velcro sandals on the runway.

Manufactured in Mongolia, Nepal and Kashmir for thousands of years, cashmere is also known as “pash” (Persian for wool) and “Pashmina” (Persian/Urdu derived from Pashmina). Handmade shawls in Kashmir date back to the 3rd through 11th century B.C. Around the 14th century, Mir Sayyid Ali Hamadani discovered the warmth and quality of Ladakh goat wool and gifted the king of Kashmir, Sultan Qutubdin, a pair of goat wool socks, and amazed by their softness and durability, he initiated a shawl weaving industry in Kashmir, according to Stevenson.

The wool eventually made its way to France through trading between Asia and Europe. France claimed to be the first European city to spin cashmere and Empress Josephine, who was rumored to have received hundreds of shawls from her husband, helped establish the trend in the 19th century, Stevenson said. Cashmere continued to be a symbol of quality and luxury in the 20th century, with shawls giving way to cashmere sweaters, she said. Like many other garments, cashmere sweaters probably started in luxury men’s wear before moving into the women’s wardrobe, according to Steele.

As early as the 19th century, trousers were seen as something that women were trying to steal from the male wardrobe, as they were a symbol of male power, Steele said. Stateside they began to be used in Western states for horseback riding, whereas respectable ladies on the East Coast and in Europe wore long skirts and rode side-saddle. Around 1910, Paul Poiret caused a big brouhaha by debuting harem pants and by the Twenties, Chanel and other couturiers were doing beach pajamas, Steele said. By the Forties and Fifties, college coeds wore blue jeans and trousers even though it wasn’t considered respectable, Steele said.

“The big fight came in the Seventies when adult women wanted to wear trousers to restaurants and stuff. Saint Laurent and [Andre] Courrèges were two of the most famous designers to promote trousers,” Steele said.

As am emblematic element of the male wardrobe, the white shirt dates back to the Renaissance, Steele said, adding that for women it was more of a chemise for underdress. In the 19th century, the white shirt became more of a staple of the male uniform, when paired with a dark suit. “So the idea of white collar versus blue collar became a real class marker,” she said.

When that spread to women’s fashion by the Civil War period, American women were early adapters of suits with men’s style white shirts, whereas the French were much slower, according to Steele. ”They were freaked out by it being so masculine. As for a designer, who was really well-known for bringing that in, in the modern world of course we think of Carolina Herrera,” Steele said. 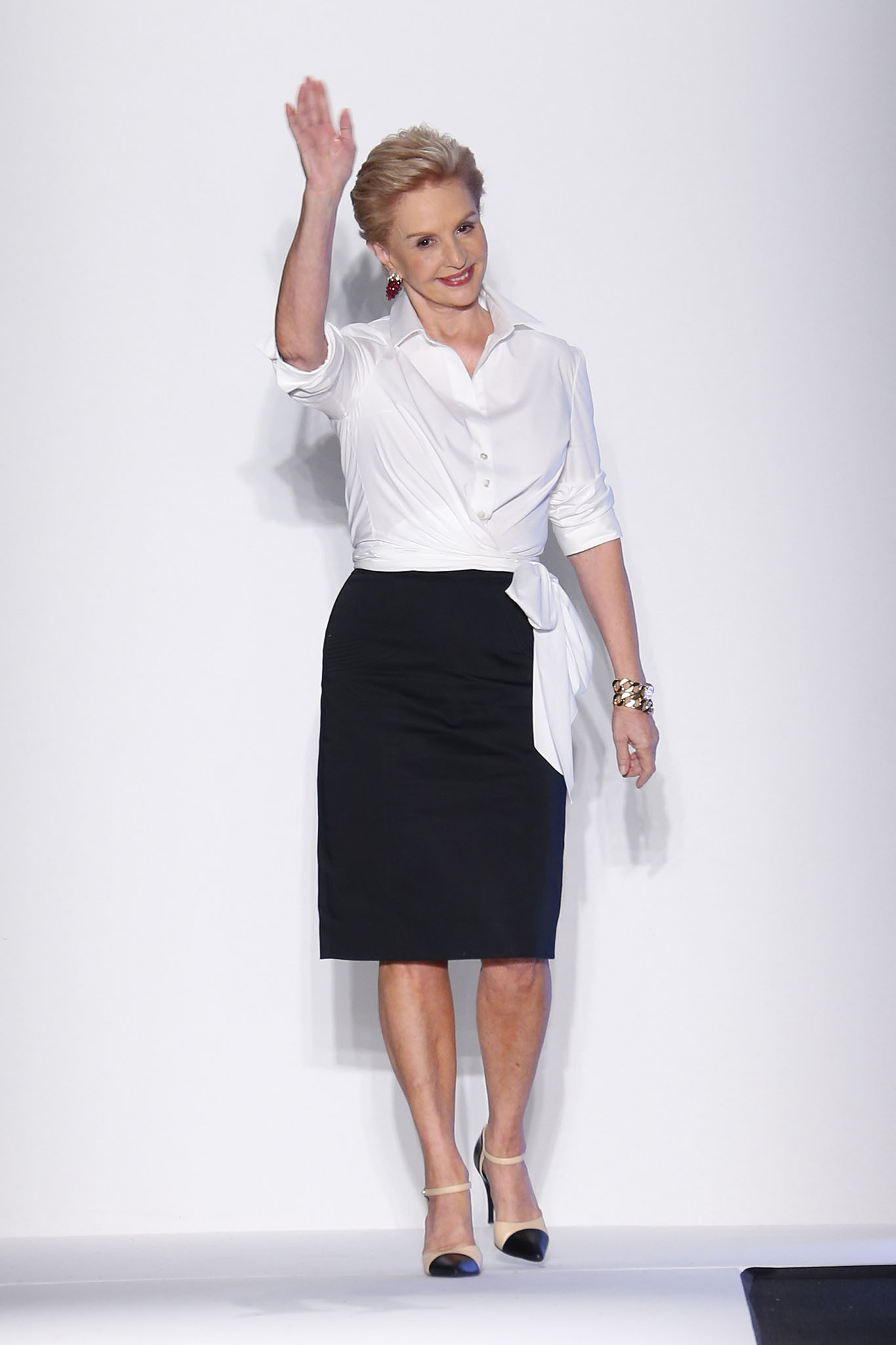 In the history of Western fashion, platform footwear dates back to Ancient Greece and remained popular for years, especially in Southern Europe. By the end of the 16th century in Venice, they could rise as high as 22 inches, according to Semmelhack. From the early modern period — around 1600 to the late 1920s, platforms were completely out. They returned first as a beach shoe in France and then in the Thirties several designers — Salvatore Ferragamo‘s platform evening sandal in particular — revived the platform shoe as a high-form of fashion footwear, Semmelhack said. Concurrently, sandals came back in the Thirties — the first time in centuries that women had exposed their toes in fashion except for a minor blip at the turn of the 19th century. Roger Vivier made the evening platform shoe then, as did Andre Perugia in the 1920s.

Flip-flops date back to the Thirties in Japan, where there was great interest in developing rubber footwear at that time. What we call the flip-flop derived from traditional Japanese footwear known as zori. After World War II, American soldiers returned to the U.S. with this rubber footwear. The Hiroshima Rubber Company marketed what they called zori at that time to American housewives as shower shoes and to pad around your house in, or to wear outside in the garden, Semmelhack said. By the Sixties, the term flip-flop came into parlance and “became a ubiquitous form of summertime, beach footwear,” she said.

Invented in the middle of the 19th century and initially marketed as a tennis shoe for lawn tennis, sneakers were first worn by the upper class since rubber was expensive at that time. “Sneakers started out as this status item. It got called sneakers in America by the 1870s,” Semmelhack said. “The name borrows from the verb to sneak.”

Omnipresent as sneakers are today, that popularity can be attributed to major league athletic companies like Nike and Adidas. Steele said, “The big sports companies are most famous for sneakers despite all of the many wonderful designer sneakers that exist in the world.” 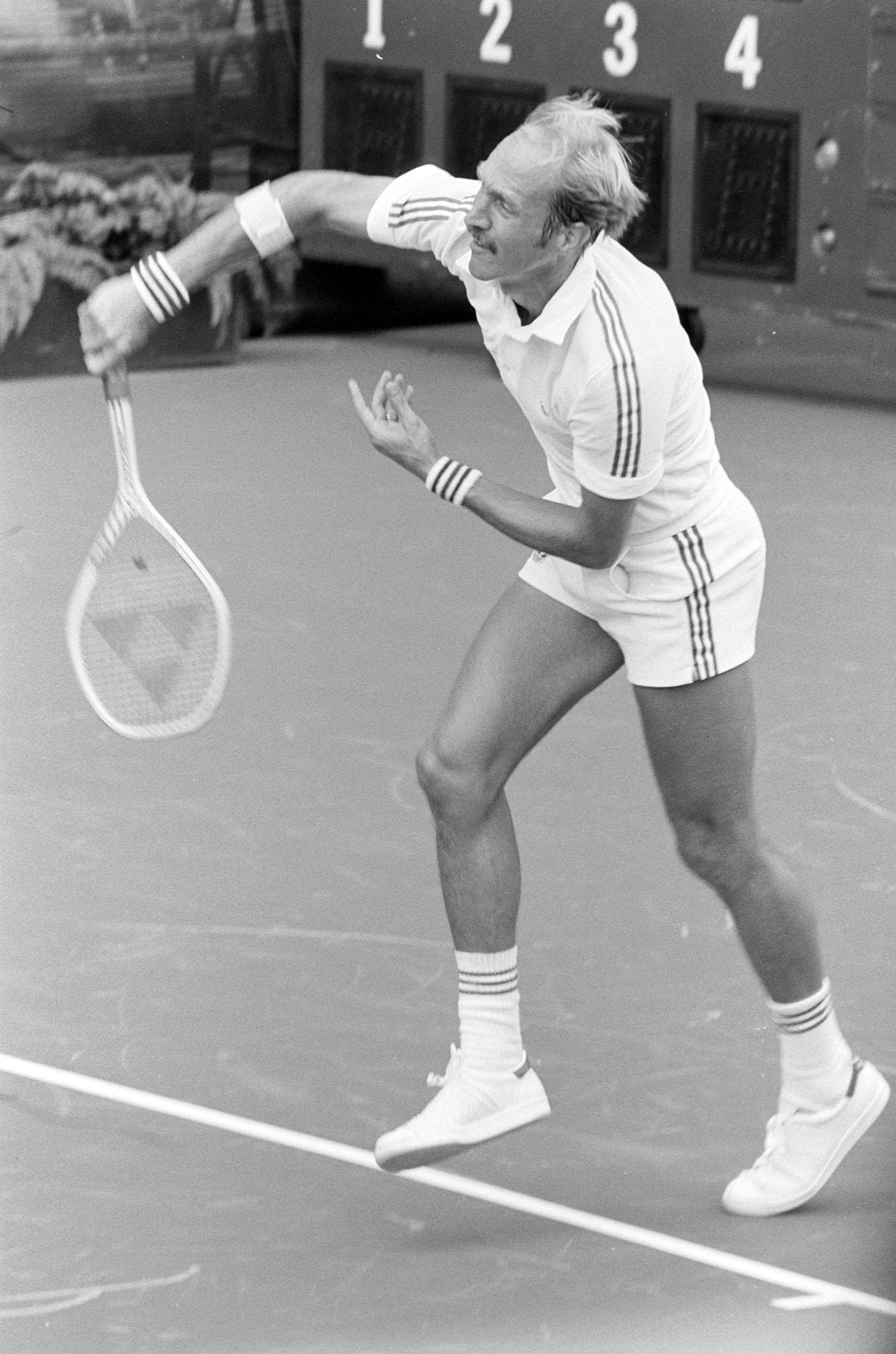