The former First Lady of the United States and the incoming FLOTUS were both in awe of the people they met, especially the spouses of service men and women who “don’t complain” even when they’re “feeling down and sorry for themselves”. Michelle and Jill were highly regarded during their time in office between 2009 and 2017, as both played key roles as the wives of the then US President Barack Obama, and his Vice President Joe Biden. In that role they ensured to support as many projects as possible, and one created and launched by then-senior Royal Family figure Prince Harry was among their most special.

Both lent their backing to the Invictus Games, as well as the Joining Forces initiative, which Harry gave a talk to while both women were in office.

In a rare joint interview, Michelle and Jill reflected on their relationship, and time in office, in 2016 – just after now-US President Donald Trump had won a stunning election victory.

Michelle described their friendship as being “pretty automatic”, after Jill explained the pair first met in Springfield Illinois.

Jill said the pair had “both been Senate spouses, but Michelle was in Chicago and I was in Delaware so we had never met”, explaining their bond was “instant” and from that first meeting “we knew we would be friends”. 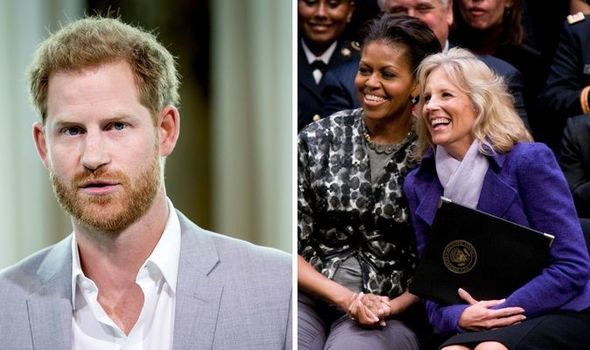 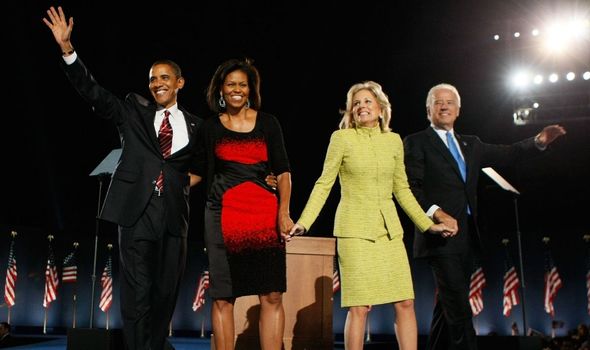 The friends were then asked what they would continue doing with their working on Joining Forces, an initiative supported by Prince Harry, and his Invictus Games.

Michelle said “there were so many moments”, including a baby show for military mums, and helping out on US show The Voice, which “was a lot of fun to be on set”.

Yet, Michelle added: “But it’s our conversations with spouses. I say this again and again, that if I am ever feeling sorry for myself or I’m feeling down, spending some time with the men and women who are the spouses of our service members, that makes you understand there is no problem that you can’t handle.

“They do it all with grace, and with dignity. They don’t complain.” 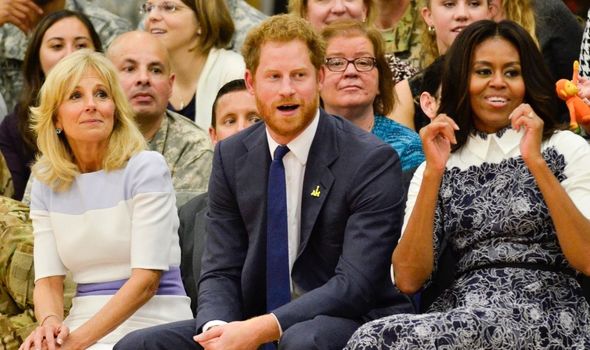 Remarking about their friendship, the women both admit they enjoy spending time together on planes while travelling to events “drinking wine”, while Jill – who maintained her job as a teacher while her husband was Vice President and will do so when he is President – marked papers.

And Jill added: “If we don’t maybe see one another for maybe a month because we’re both in different places, when we get together it’s like that friend you see like every couple of years – it’s like that. This is what this is.”

Their interview with Entertainment Weekly came after Harry had gone on a seven-day visit to the US, and joined Michelle in honouring the country’s military mothers during a White House reception. 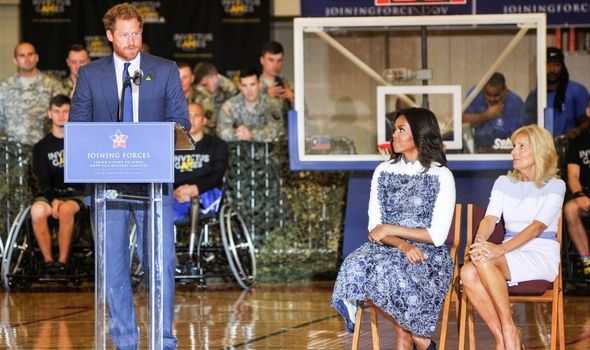 While there, he also visited a landmine charity’s gallery, which highlighted the work his mother, Princess Diana, had carried out during her life.

Speaking at the event, Michelle described Harry’s visit as an “honour”, adding: “As you all may know, Prince Harry is a captain in the Army Air Corps in the British Armed Forces.

“We are absolutely thrilled he could be with us today. He just arrived in DC. He only has a limited time here.

“But when he heard about this tea and all of you, he wanted to be here to personally thank you for all your service.”